One of the most well known and likeable characters in motorsport, Johnny Herbert was a highly successful racing driver who know fronts the coverage of Formula One for Sky Sports. Johnny’s insight and first-hand experience is invaluable in front of the camera, allowing viewers to understand exactly what it takes to be an elite driver.

Known for his exploits in Formula One and Le Mans series racing, Johnny’s career began in the mid-80s after catching the attention of Eddie Jordan. The pair won the 1987 British Formula Three title, highlighting Johnny’s consistency through a season of motorsport.

After returning from injury in 1989, Johnny gained a seat in the Benetton F1 car, scoring points on his racing return in Brazil. An amazing sporting personality, Johnny’s drive and determination to overcome the adversity of his injury was commended by the motorsport world.

A regular driver in Formula One from 1990 to 2000, Johnny finished on the podium seven times, winning three races in his career. Other notable achievements in motorsport included winning the 1991 Le Mans race is the iconic Mazda 787B. Along with performances in the ALMS and BTCC series, Johnny has shown the breadth of skill, making him easily one of the most natural British racing drivers of the modern era.

Since joining the Champions Celebrity agency in 2011, Johnny has secured a role as a commentator for the new Sky F1 Channel. We worked with Johnny to prepare him for commentating with huge amounts of practice and training. Enjoying huge corporate success on the back of his appearances, Johnny has established himself as a hugely capable after dinner speaker and television personality. 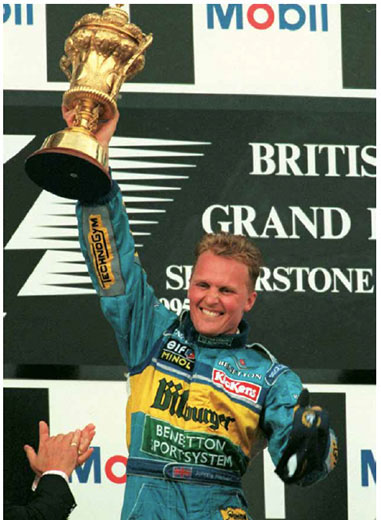